I was standing at the corner waiting for the light to change. Across the street was the building I was supposed to be going into. Walls of dirty glass with taxicabs behind them. I had just started driving yesterday. I didn’t want to be a cab driver. I wanted to be famous. I wanted to be rich and famous, but I wanted the fame to be like Thomas Pynchon’s or J. D. Salinger’s. I didn’t want anyone to know where I was, just who I was. But things weren’t going to be that way for a while so I thought I’d drive a cab. I had no idea how to look for a job or if I was good enough at anything. They always needed cab drivers.

I have never had the same kind of job twice. Once I leave a job, I leave the field forever and start over. My last job had been in an art gallery.

The company made you go through a class on how to drive the way the company wanted you to drive. There were about forty people in there that all wanted to be doing something else. The class was given by some guy in his fifties who looked like he’d been through a lot of different lives. He said he was on his fourth wife, all Filipinas. He kept making the same joke–”So, I says to my future ex-wife…” It was a little funny the first time.

He told us that cab drivers were supposed to drive the speed limit. San Diego drivers always went over the speed limit on the freeways, but not cab drivers, he said. We were supposed to keep it at exactly 55 miles per hour and drive in the middle lane no matter who was on your ass or how irritated they seemed. “Don’t drive in the right lane because there are too many people getting off and on. Always the center lane.” He may have talked about more things but I don’t remember. Just the future ex-wife and the center lane.

When the class was over we got our assignments. I told the supervisor that I wanted to work the airport. I wanted to sit around and wait for travelers to tell me where to go. But I lived in a suburb and they needed a guy in the suburbs. I told him that I knew the city better, that I didn’t get around the suburbs very much, I just lived there. He said it didn’t matter. He needed someone out there.

It wasn’t a regular kind of cab route. It was more of a customized bus service. People would call the service and you’d go pick them up while you had other passengers. Everyone paid the same amount and nobody tipped. You were supposed to route yourself in a way that you dropped people off and picked up new people along the way. There were always at least three or four people in the cab. I didn’t know the area at all and kept getting lost. I had to ask the passengers for directions. At first, they were helpful. Then they started getting irritated. Some of them had been in the cab for way too long.

One lady said, “You’ve picked up three people since I got in and you passed my stop by a block. You could have dropped me off.” I apologized and she said it was all right. Then she said, “What happened to the other guy? He always dropped me off first.”

Pretty soon everyone was complaining and I was getting really stressed, which made it harder to concentrate on the routings. The radio dispatcher kept telling me to pick up more people, but I had a full cab because I wasn’t dropping anybody off. It got a little tight in there and there weren’t enough seat belts. I could hear people sighing. I tried to remain friendly but I finally had enough and pulled over to the side of the road.

“What did you pull over here for?” asked one guy. I ignored him. I didn’t like his voice.

I turned down the dispatch radio and twisted around in my seat. They were all looking at me with something like shock, as if I might be violent. “Listen,” I said to all of them. “I didn’t want this job. I wanted to be out at the airport. I don’t know this area, but I live in Santee so they stuck me out here because they thought I would catch on. I told them I didn’t know the area but they didn’t listen. It’s my first night on the job. My first time ever driving a cab. I know it sounds like a cop out, but it’s not my fault. If you want to complain, you should call the company. I really think you should, too. I won’t take it personally. I’m sorry that I’m not doing better. I’m really trying.”

“We still need to get home,” said the guy with the lousy voice. A lady elbowed him to shut up, but he had a point.

By the end of my shift I was getting a little better. It was dark and I had one passenger left and we were having a nice conversation as she told me where to turn. Then I had to drive all the way back to the city, turn in my cab, get my car and drive back out to the suburbs. I was exhausted.

Now it was day two and I was standing at the light, waiting for it to change. It was a long light. It gave me time to think. I looked at the building across the street, through the glass at all those yellow cabs. When the light changed, I turned around and walked back to my car and went home. Two weeks later I got my only paycheck in the mail, along with a letter telling me that I was unemployed. Under ‘reason for termination’ it said ‘job abandoned’. 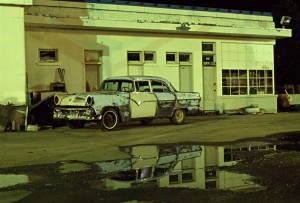