This morning, about 5:30 am, I was reading some Bukowski with my coffee. It’s my favorite time to read because I’m wide awake and won’t fall asleep like I do in the afternoons. The window behind me was open a few inches and it was still dark outside.

After a few minutes, I started hearing some buzzing inside the lampshade. I hoped it wasn’t a yellow jacket. It had happened before. Last week, one got inside the lampshade and I couldn’t get it out and had to pick up the lamp and stick it outside the window and shake it. I know they say that it won’t sting you if you don’t bother it, but it was bothering me.

I looked up inside the lampshade but didn’t see anything so I went back to my Bukowski. I was reading one of his grubby sex scenes in Women, my least favorite parts. He had a good way of making sex unappealing and mechanical. Some seconds passed and then something landed on my sleeve. Out of the corner of my eye I could see the yellow and black stripes and I swiped at it, knocking it to the floor.

I set the Bukowski down and moved the chair away from the window. I put my slippers on and tried to find the bastard so I could crush it. It was down there, on the rug, and it appeared to be struggling. I got down a little closer and saw that a spider had built an invisible web where the floor meets the wall. The yellow jacket was stuck in it. I had knocked it into a trap and now it was fighting for its life with the spider. Things had changed very quickly for both of them. It had started out as an easy morning. I knelt on the floor to get a better view, to put myself more on their level.

The spider waited as the yellow jacket lost its mind. Then it probed with its legs some more, gave another bite between the plates, and wove a little more web around it. This went on for a while and the yellow jacket began to slow, resting here and there. The spider stretched a long leg out, testing. The yellow jacket flinched and jabbed its stinger a couple of times, but lazily. It was shutting down. It didn’t want to go out a coward, so it kept fighting, but I could tell it was already resigned. It was like it was waiting for the bell to ring, for it to be over. The spider was simply too much for it. Until now, the yellow jacket may have never even imagined that spiders existed. All it wanted was some morning light inside the lampshade, something to make the day worth getting up for.

Then the spider ran along its web and disappeared behind my desk. The yellow jacket just lay there in a ball, wrapped up in the invisible web. I couldn’t see the web at all. It looked like the yellow jacket was suspended in the air half an inch above the floor. Its legs and mandibles were still going, but with less energy, and the stinger had stopped working. Then the spider came back and wrapped a little more web around it. The yellow jacket protested some, but it was done for. The protest was a plea for mercy. Please let me go and I’ll send you a couple of flies. The spider grabbed onto the yellow jacket’s head and started pulling it along the web. The yellow jacket gave one final brave thrust, shaking everything, and gave up. The spider hauled it easily the rest of the way, disappearing with it behind my desk, to the spot that it had prepared in the larder for its next meal, maybe the only meal it would ever get.

I moved the chair back against the window and sat down. I took a sip of coffee. Then I picked up the Bukowski and dug into another grubby sex scene. 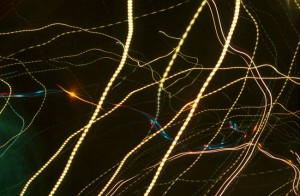 One Response to Warriors