Posted on September 5, 2016 by George Ciardi

The father of the children went out to the car, passing through the shadowed carport. He was angry again, at people, at his faults and failures, his wife. He started the car and put it in reverse, backing out too fast onto the gravel and feeling a bump under the back wheel as he drove over something.

“What did those goddamn kids leave in the driveway this time?” he thought as he stopped.

He looked toward the house at his two daughters, perched as usual on the back of the couch, ready to wave to him through the window as he left, excited for the interaction. Their hands were in the air, ready, as their smiles fell together and the older one turned her head and said into the house, “Mommy! Daddy ran over Molly!”

The father of the children got out of the car and walked around to where the dog was. Straining to lift its crushed hindquarters, the dog pushed itself up on its forelimbs, its face thrust to the sky, thinking only that it had been sleeping on the hot dirt and then something painful had happened. The father of the children didn’t know exactly what to do. Conflicting emotions ran wild inside him and he stood there, frozen.

Suddenly, there she was, his wife, the one he could not love no matter how he tried, the one he blamed for everything he knew was his fault. She picked up the dog and held it to her, whispering to it. There was a brief commotion and then the father of the children hustled the daughters into the car. Their faces were frantic, calculating, trying to do the right thing quickly. Plans had changed. He helped them with their seatbelts then got in and drove.

All the way to the veterinarian, his wife kept whispering to the dog as its eyes glazed, growing further away. At the vet, the father of the children stayed with the daughters in the waiting area until his wife came out from the back, cradling the dead dog in her arms.

She cried as she held the dog, as she walked across the waiting room to the door, followed by her crying daughters and her stricken husband, leaving behind the vet and his two assistants, who looked after them with concerned and understanding faces.

After the daughters finished their lunches, the younger one went down for a nap and the older one sorted her Skittles. She rarely ate her Skittles in under an hour, always lining them up and counting them and rearranging them until the order of the colors pleased her. While she was doing this at the kitchen table, the father of the children stood outside the back door putting the dead dog into a plastic garbage bag. The dog had been twelve years old and had suffered from arthritis and cataracts. It had been with them through all the stages of their struggling marriage.

There was a second dog. This dog, still very much alive and healthy, watched as the father of the children put the dead dog into the garbage bag. The dogs had been close companions for years. This dog followed the father of the children around to the side of the house where he laid the dead dog on the ground and went to get a shovel. The daughter who was awake and sorting her Skittles, gathered the Skittles into one hand and followed her father, who was now carrying a shovel, around to the side of the house.

Nobody spoke as he dug.

When the hole was sufficiently deep, the father of the children put the dead dog into it and began to cover it with dirt. The other dog lay on the grass with its chin on its paws, watching. The daughter, apparently unhappy with the color pattern of her Skittles, began to rearrange them in her palm, her lips moving as she counted them. 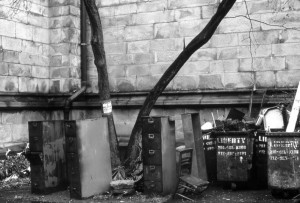