“Can I start getting my allowance again?” I said. I already knew the answer.

Dad put his fork down. He had those big hands and forearms. Factory hands. Sometimes I called him Popeye, but never to his face. “What for?” he said.

“Well, that’s too goddam bad. I didn’t tell you to quit your paper route.” He sopped up some sauce with a piece of bread. “I thought you were looking for another job.”

I’d been looking for weeks. “Nobody will hire me. I’m only fourteen.”

Mom turned on me then. “You talk like again and you’re going to bed after supper.”

I backed off, but only in volume, and not enough of it. “It’s not fair. Patti still gets her allowance.”

Dad did this thing when he got angry where he would inhale through his mouth and exhale through his nose. He did it now. “You keep it up and you’ll be doing her chores, too. And she’ll still get her allowance.” Then: “Where’d you look?” As if I only needed to pick the right places.

“Lots of places. Today I went to The Plantation.”

The Plantation was the fancy restaurant at the mall. It was famous for its peppercorn steak. Sometimes movie stars like John Wayne and Lucille Ball ate there. My father used to be a waiter there back when he was working a few nights a week. It was called the Rib Room then.

“Who’d you talk to?” he said. He started getting excited.

“You’re shittin’ me.” If it was the same Peter, then my father knew him from the Rib Room. He had been the night chef. He and Dad used to have some fun after work until Mom started getting angry about it. He looked up The Plantation in the Yellow Pages and called. It was the same Peter. Dad twisted on him for a bit and when he hung up he told me to go back tomorrow.

The main thing was that I couldn’t legally work until I was sixteen. And even then I was supposed to get working papers at the town hall. Peter told me to always pretend I was in the process of getting the papers, if management should ask. If they asked too much, he would have to let me go.

Peter yelled at all the kitchen help, but at me the most. He gave me the worst jobs–pot washer, usually–and always told me I was the slowest guy on the crew. I guess he was protecting himself. He would chase us around the kitchen, bowlegged in his white uniform, carrying one of those long wooden stirring paddles and whacking it on the stainless steel prep tables to make noise. All the dishwashers were just teenagers and thought of him like another dad.

A few months into it, there was talk of a strike. The union wanted raises. My dishwasher pay, if we got what we wanted, would go from $2.25 p/hr to $2.45 p/hr. I wanted my twenty cents. But the restaurant wasn’t going for it so we voted to strike. Peter was not part of our union and he took the strike personally. During our last shift he was somber. He still carried the stick, but he didn’t use it and didn’t yell.

After the shift ended we sat on benches in the locker room downstairs, slowly changing out of our uniforms. Teenaged dishwashers, white waiters, Puerto Rican busboys. All of us guys. Our feet were on pallets to keep them off the wet floor. Bobby Nash, the shop steward, was talking, telling everyone what time to be here tomorrow and where we could pick up our picket signs.

“It’s a Friday night,” he said. “They’ll be crowded. I want everyone by the front door.”

Some of the kitchen help got drunk before they joined the picket line, and they kept slipping away to get stoned or chug beer. There were an awful lot of us marching around with signs in our hands, declaring this and that unfair. The law was that we had to keep moving. The cop assigned to keep us in line was named Jerry. I never saw another cop there the whole time. Always Jerry. He was short and clay faced, the kind of guy who looked like he got shoved around a lot when he was younger and still hadn’t figured out how to deal with it.

I learned a lot that night about what I could say to adults and get away with. When a rich couple would come up to the front door, all decked out for a Friday night, we would start in on them for supporting scab labor, the guys taking our jobs.

The rich people were appalled. We were right in their faces, relentless. We were getting them back for everything. The wives clutched their furs tighter; the husbands lengthened their strides, pushing their wives along toward the door. Every once in a while, a brave one, usually a wife, would stop and try to tell us that we had no right to talk to her that way and we’d crowd around her and scream double-loud–”SCAB! SCAB!”–while she pleaded with Jerry to stop us. Jerry would try to explain to her that we were indeed within our rights. As long as there was no hitting or spitting, pretty much anything went. The rich people really gave it to him, but there was nothing he could do.

As the weeks went by, the crowd of picketers got smaller and smaller. Some of the guys lost interest. Some of them had families and rent to pay and got other jobs until the strike was over. One day after school, my little sister Patti asked if she could come with me. She wanted to know what it was like. I’d been telling her about it for weeks. She wanted her shot. We took the bus to the mall and walked over to The Plantation. We were the only ones there, except for Jerry. Jerry was a constant. It was a very slow crowd, mid-afternoon. We had to be home for dinner. There wasn’t going to be a lot of action, but we picked up a couple of signs from the pile and started walking in circles. Patti was primed.

After a while, a guy came out. He was about thirty-five, unprepared, casual. He was putting a stick of gum into his mouth when Patti and I let him have it.

He was completely shocked. He looked like a guy who normally had it together, but being chewed out in public by kids had thrown him off balance. He scurried away into the parking lot, looking over his shoulder to see if we were following him.

Then a lady came out alone. She looked like somebody’s grandmother, but not ours. She was dressed better than anyone in our family ever had been. Patti let her have it first then I jumped in. The lady didn’t see it coming. It was such a lovely sunny day. Who would have expected to be accosted after lunch? She got all blustery and offended, telling us to be quiet and to have some respect. We were really close to her. It was a weird rush to see fear in the eyes of an adult, fear caused by us. It was like she didn’t know what to do. She could have walked away, but turned to Jerry instead, telling him to make us be quiet. Jerry gave her the usual spiel about protecting our rights.

“What rights?” she said, her voice quivery. “Look at them! They’re just children!” Then she appraised us all, very disgusted, and stomped away.

Jerry took a good look at us then and seemed to realize it for the first time, as if it hadn’t occurred to him before. We were very clearly kids, only one of which was employed by the restaurant, illegally. He was about to have one of those conversations with us, when the guy we had shocked pulled up to the curb and rolled his window down. He wanted to explain. To Patti.

“I was meeting someone in there for lunch. Important business deal.” He looked up at her with sunglassed eyes, chewing his gum with big open chews. He was coming on to a thirteen year old. “Very important business. I had to go. Ya dig?”

Patti rolled her eyes. “Dig,” she said, putting a little slime on it.

The guy stopped in mid-chew. You could tell his eyes were moving around behind his sunglasses, looking at each of us. Then he gave his car the gas. His tires squealed a little as he made the corner up ahead. Jerry was sort of laughing about it. 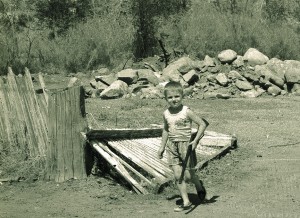 One Response to The Plantation