She had a pickup truck with a cap over the bed and a squeaky-hinged door on the back that opened up to reveal stacks of small animal cages.

I’d seen the truck out here before a few times when I was wandering around the industrial areas in the middle of the night looking for something to shoot. It was always at a distance and I never thought anything about it. I figured it was some homeless person living in their vehicle.

“Once I lure one in, I just shut the door and I have them,” she told me.

Then she’d put the cage with the cat in it into the bed of the truck and pull out an empty one and it would all start again. There were cans of cat food lined up along the top of the dashboard, the defroster on high to keep the cans warm. “They’re more likely to come if it’s warm.”  She showed me how she put it in the cages and where she put the cages to lure in the cats and told me how the newspaper had done a story on her once and she had been almost famous for a little while. It didn’t change anything, though. There kept being lots of stray cats–feral and suspicious–and she kept going out night after night to try and trap them.

It’s funny that it took me so long to run into her. I’d been out here, in these areas of night machinery and yellow clouds and black, endlessly deep corners for years, lugging my camera equipment around looking for something that made me feel like it was the right thing to spend time on. And she’d been out here, too, putting out her traps and luring in the cats with warm food, and then letting them go again the next day in the same place in case they had family.

We trolled the same places, used the same hours to fulfill our needs. I really thought we would have seen each other sooner.

She didn’t ask me about my camera or my tripod or my fingerless gloves. Or why I was out here. She was too busy telling me about the nights she’d spent sitting in her truck with the defroster on high, as the rain fell heavily outside, waiting until it broke so she could set her traps. I tried telling her how I’d been in some magazines for my pictures of factories, or how I loved the night and the atmospheres of machinery and the many-textured sounds of freight trains as they ground slowly along the tracks, but she wasn’t listening. She kept looking around for the cats, knowing that they could see her even if she couldn’t see them. Sometimes, when I got my film back from the lab, I would see one of these cats in a picture, its eyes like embers looking into the lens, and I would remember nothing about the cat being there because I hadn’t seen it. It had been right in front of me, in the shadows, and I hadn’t seen it. But cats can be so still. Two minutes or more I would expose the film and when it came back from the lab the cat would be as clear as if I’d shot it at one five-hundredth of a second.

“Sometimes it gets awfully cold out here, after the hours go by,” I said to her and she agreed, nodding.

“Yes, it does. It’s nights like that when I worry,” she told me, pausing to be sure I had time to understand what she was telling me. “I’m always afraid that I’m going to fall asleep in the truck and a cat is going to be stuck in the trap for longer than I want him to be. They don’t understand that I’m just trying to help them, but that doesn’t matter.”

I looked up at the sky then, to see if the clouds were going to get interesting. She kept talking.

“When I get them to the clinic they don’t like it very much.” She was leaning on her truck and I was leaning on my car. Our territories. “The lights are awfully bright in there and they usually give the vets some trouble. Confusion makes them mean.”

“Do you ever catch the same ones more than once?” I asked her. “Ones that have already been neutered?”

“Sometimes. They all like to eat. I just let them go again once they’ve had their fill.”

The shadows at night are different than the shadows in daylight. Endless and without hope. Depth perception is skewed. I remember that she had brown hair. At least it reminded me of brown hair under the yellowish cast of the sodium vapor lights. The shadows in her eyes were too dark and I didn’t bother to look at them.

After a while the clouds began to get interesting again and I told her I needed to leave, to get back to work. I think she was glad of that; that I was the one who said they needed to go, so that she didn’t have to be. As I pushed away from my car and pretended to brush the dust from my hands, the end of the conversation, she moved around to the rear of her pickup and took out another empty cage. She set it on the ground and reached in through the driver’s window to grab a can of cat food.

I started my car and flooded the area with headlight as I waved to her and said I hoped I saw her again sometime. I watched her in my rear view mirror, growing distant, as she opened the door to the cage and set a can of cat food deep inside it. 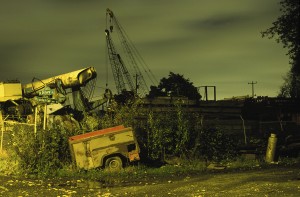