Putting One Over on the EPA

It was the end of a workday, Gerald Ford was winding it down as the nation’s only never-elected president, and I was standing with Dad next to the chemical cabinet scrubbing the lacquer off my hands with a diaper soaked in acetone. The company used a diaper service that sold old diapers that had been filled many times by the next generation but had grown too rough for a baby’s ass. We bought them by the case and used them for everything you would use a rag for, including wiping fingerprints off brass prior to lacquering, and for washing our hands. The acetone dripped off the diaper onto the floor as it glugged from the can. Dad watched it drip and started breathing in through his mouth and out through his nose, a sure sign that it bothered him.

“Go easy on that stuff. I can’t get it anymore.”

I put the can down. The diaper was still dripping as I wiped my hands. “Why not?”

“How the hell should I know? The EPA says it causes cancer or some shit.”

I stopped wiping. “What? I’ve been washing my hands with this for three years. How long have you known about it?”

“That’s not the point.” I looked at my hands, cold and dried white. Sometimes the skin would crack. It had never struck me as unusual before. “If it’s bad for you…”

“Everything gives you cancer. You want to stop doing everything?”

I was wearing a uniform shirt with my name stitched above the pocket. George. But it wasn’t my shirt; it was one of his and it was too big for me. “Everything doesn’t give you cancer.” I said it in a low voice. I knew that by disagreeing with him, I was challenging him.

He grabbed the diaper out of my hand and threw it on the cabinet shelf. His lips were tighter than ever. “There. Don’t use it anymore. Alright? Are you happy now?”

This was the point where I usually stopped talking.

“See if you can get it off with soap. You’ll be standing at the goddamned sink all night. And I’m not going to wait for you, either. You can wait until you get home to wash it off, for all I give a shit.”

He was always not giving a shit about things. It was a weird saying to me. It created an uncomfortable visual in my mind every time I heard him say it. He had others. That’s a load of shit was one his favorites. He’s a hot shit was another, which could be used either positively or negatively depending on intonation.

I went upstairs to the locker room and washed the whiteness off my hands before changing into my street clothes. I sat at the picnic table where we ate lunch and blew some of the black buffing dust off of Earl’s newspaper before skimming it. Everyone else had gone home already. We were always the last to leave. Dad came up a few minutes later and got undressed. He didn’t care that he was naked in front of me, but I made sure that I was never naked in front of him, which he said was going to give me trouble when I went into the Navy next year. He even broke the lock on the bathroom door at home just so I couldn’t lock it. Sailors didn’t need to lock doors on each other, at least not during his Navy days. I guess it was supposed to be good for my future. It didn’t seem to matter to him that I had sisters and a mother in the house, too.

He was lathering up in the shower singing some Patsy Cline song when I decided to go wait for him outside in the parking lot. 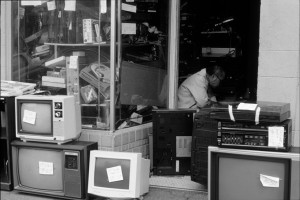