My parents couldn’t come to get me, so I was supposed to ride home with Porky’s dad. I had never met him before and I could never remember Porky’s real name, but it had been decided that I was going to ride with them, along with a couple of other guys. We were standing by the jamboree hall, dirty and talking, with our camping stuff all around us. Porky still had his uniform on. He was short, but not fat; I don’t know where the nickname came from. His dad was the last parent to show up. He left the car running as he got out and opened the trunk. It had the low rumble of a failing muffler. The quivering tailpipe burped the smell of hot gasoline. Porky’s dad reminded me of some of the guys I used to see hanging around with Mr. Lynch outside Santy’s Cafe with beers and cigarettes in their hands, laughing at the world. But I was only twelve and what did I know?

We put our tents and sleeping bags in the trunk. Porky’s dad didn’t ask how we liked the camping trip or if we had earned any merit badges. He didn’t really talk to any of us, including Porky, who was sitting up front. We just behaved the way we knew we were supposed to when someone picked you up in their car. I was in the back with Jimmy Conlin and Don Masterolli. Jimmy had a mini-bike with a three horsepower engine, so I used to try to hang around with him after school sometimes. He had an overbite and was kind of goofy and didn’t have many friends. The mini-bike came in handy for that. Don Masterolli had accidentally stabbed me in the leg once on another camping trip about a year before and it got him into some trouble with the Scoutmaster. He had wanted to play chicken and I didn’t. He kept throwing the knife closer and closer to me and I refused to move. I’d gone into an uncontrollable fit of laughter when the knife was sticking out of my leg and before it had begun to hurt or bleed. The look on Don’s face was funny. He was an alright guy. He hadn’t meant to stab me. I kept laughing in the back of the ambulance and word about it got back to the Scoutmaster. Parents got involved. They really let Don have it. He was almost kicked out of the Scouts.

Nobody talked in the car. Porky’s dad had an air about him that made you not want to say much. He just drove and smoked, with his window barely open. I was on the passenger side of the back seat, so I could see the side of his face as he drove. His ear was shaped funny, like a part was missing, and there was some dandruff on his shoulder. His skin looked as if it had given him a bad time in his youth. As he smoked, he seemed to be thinking about things that made him unhappy, sighing and rubbing his forehead between drags.

It was a long drive, hours, and at one point he pulled over to the side of the road so we could all take a leak. Porky’s dad wasn’t much taller than the rest of us, except for Porky. A cigarette drooped from the side of his lips as he took his place in front of us. He had on one of those short zip-up jackets with the elastic waistband and the slit pockets that all the dads were wearing in the late Sixties. We stood there like men, pissing into the gravel. My own dad had never done this with me. No adult had. About midway, Porky’s dad farted. It was the most noise he’d made all day and I felt embarrassed for hearing it, smiling a little. I didn’t know what to do. It was like hearing it for the first time. I wondered if I should laugh or crack a joke, the way my own dad did whenever he farted. I wanted him to feel okay about it, in case it had been accidental. But Porky’s dad wasn’t like that. He didn’t shift his body weight or seem uncomfortable in any way. He just let it hang there, like it was natural. None of the other guys gave any indication that they’d even heard it. Not even goofy Jimmy. Everyone just looked down at the four dark spots on the gravel where our piss was soaking in. I was glad for the breeze.

We all finished one at a time, but close enough to each other that it seemed coordinated. We got back into the car and started driving in silence again. I went back to looking at Porky’s dad’s ear and watching him smoke and think about unhappy things, if that’s what he was doing. Don Masterolli fell asleep against my arm. After a while, I leaned my head on the window to feel the vibrations from the road, wishing I could sleep. It was a long drive. The trees and bushes went by in a blur. 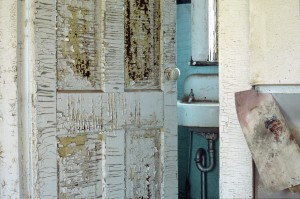 One Response to Porky’s Dad