Pieces Cut from the End (Part 2)

Maybe I should have my mouth swabbed and my DNA checked to see where all this trouble comes from.

All of that history just sitting in my mouth, waiting to be discovered.

I plunged my hand into the bucket of sleeping snakes. The snakes began to stir, thick and muscled and glistening, slithering between my fingers. Their skin moved easily over mine, seeming wet at first, but I knew they were dry and that their scales were just oily. All the snakes were black and very dark except where the light reflected off their scales, writhing beneath the light, as if being slowly churned. I could not see the heads of the snakes, or even the tails, only the bodies, curling around my wrist, cool and dry and confident.

The bucket was made of galvanized steel, rusted in spots. It had one of those loose metal handles that squeaked when it moved or if you carried the bucket, especially if you were swinging it. It was the kind of noise that told you by its pitch how full or empty the bucket was. I had the feeling that if I carried the bucket, if I swung it by its handle, that the pitch would be low from the weight of the snakes. But I didn’t want to move the bucket because I was afraid that the snakes might bite me. Sudden and sharp. I didn’t know if they were poisonous and I hadn’t seen any heads or tails, just bodies, so maybe not. But still.

I tried to think of why I had stuck my hand in there in the first place, but I wasn’t sure. It was a sudden thing. An impulse. A spur of the moment. The beginning of the dream. There had been nothing before.

Now I didn’t know how to reverse it. As the snakes coursed through my fingers and around my wrist, I wondered if they knew that my hand was something alive. I couldn’t tell. When I had plunged my hand in, they had been sleeping. When they started moving, I had already stopped. So, if I moved now, would it frighten them and cause them to bite me, purely in self-defense? I wouldn’t blame them. I was in their territory now. But it would still be bad for me.

Someday I’ll be found out, and then what?

I found this page in an alley one day while walking on my lunch hour. It had been torn from a notebook. It was undated and unsigned. I hoped the author had made another copy. This is what it said:

I hate rich people. I have always hated rich people and probably always will on some level, even the nice ones. If I ever get rich I will probably hate myself and will welcome others to hate me, too. I consider a rich person to be anyone who has more money than me, and I don’t have much, so watch out.

While watching a western: I don’t think I would ever take a loaded gun off a dead man and stick it down the front of my pants.

A man who’d been wronged was shouting as he ran toward us on the sidewalk. We saw the bicycles darting up the middle of the street, the riders dodging traffic, pumping for their lives up the hill and into the darkness, disappearing, with the wronged man in pursuit, shouting, profane, threatening their lives. Something about a theft.

The wronged man was incredulous, eyes and hair and encrusted clothing running wild in our direction. He stopped a few feet from us and we froze, trying to appear small and docile beneath the glare of a streetlight. He didn’t seem to see us, seemed to be looking right through us, past us. But there was always the possibility of blindly lashing out, so we ducked to the side, into a cement corner at the entrance to a parking garage. I had a bottle of beer in the grocery bag I was carrying. I could hit him with that if it came down to it. He went back and forth on the sidewalk a few times, passing us again, his brain burning, raging at the distance, then went back the way he’d come.

A small red car cut across the street and stopped in front of us, facing traffic in the wrong direction. Inside was a man in a Seattle Police uniform. He was smiling and wanted to know if we were alright.

“I thought that insane guy was robbing you.”

“No. Just giving him some space,” I said, emerging a bit from our cement corner. We told him about the bicycles but he just nodded like he knew about that already. He bid us a good night and drove off.

When we got to the corner, the wronged man was back there, across from us, a cardboard sign in his hand, facing the off-ramp traffic. Someone was passed out on the sidewalk next to him, a sleeping bag covering their upper half, a foot dangling over the edge of the curb. Then the wronged man looked our way, past us, at some distant thing or person, and began shouting again. His shouting was like that of an angry cage fighter. He dropped his sign and ran toward us across the street, the white noise of the interstate at his back. We tensed, hoping to be invisible. His eyes were cornered and rabid, wiped clean of his history. He only wanted back what little he’d had that had been holding his life together. The depth of his sadness was unbearable. How long can someone live this way?

He ran past us, continuing on up the hill at full speed, chasing.

I don’t want to wind down, I want to be stopped abruptly, without warning.

As far as time is concerned: we are always in now. There is nothing else except mystery ahead and memories behind.

“Hey, remember that guy? The one who took those amazing pictures of factories?”

“You thought he was a genius.”

“I did. I wonder whatever became of him.”

“I don’t know. I guess he hung out in the unnoticedsphere for as long as he could take it and then gave up.”

“I don’t know if that’s what happened.” 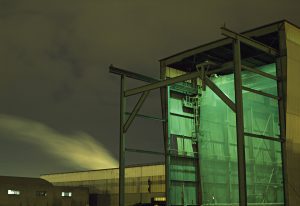