Pieces Cut from the End (Part 1)

I know this: Somewhere in the South Pacific there is an island, untouched by human hands, that is covered in the garbage of the world, swirled there by dispassionate tides. An island buried in plastic that never dies.

The lament of a stricken man:

keep hoping that if I ignore it long enough and

in just the right way that everything

will become alright and

I can go on with just me by my side

But then things happen, things that some people say

But if controls had been applied

Sometimes I want to crawl,

to hide in bright light,

to disappear and feel weightless.

The fatigue has the most weight of all

the sagging of facial muscles,

the difficulty of casual conversation

distracted for a while

so that I can believe in joy and security and

the deepness of camaraderie?

Not that there isn’t money

but I mean real money

Money that doesn’t exist but should

because we keep believing in it.

I was lying in bed with a sheet halfway to my chest as my first wife got ready for work. I was working the swing shift and liked to wake in the morning so we could talk about the white-haired drunk lady next door and whether I had found her sleeping on her lawn again.

On her way out of the room my first wife said she thought she might be pregnant. I had a smile on my face as I heard the door close. I watched out the window the gentle wavering of leaf shadows across the bark of the tree and I knew that I would sleep no more that morning. Beyond the tree was the trailer that never moved. Nobody ever went in and nobody ever came out. There was a dim light in one of the greasy windows that stayed on all the time. The trailer was no more than fifteen feet away from ours and we knew nothing about it, except that it was close and always quiet.

A few nights later, we were awakened in the middle of the night by a murmured rustling and the spinning blue of police lights bouncing off the paneling in our bedroom. We looked out the window at the trailer that never moved. The door was open and there were some police milling about, talking quietly. While we were still wondering, a police officer backed out of the doorway carrying one end of a body bag, zipped tight. He made his way down the two rotten steps as the body bag emerged in full from the doorway, as if the doorway was a birth canal for body bags filled with suicides. Another police officer emerged holding the other end of the body bag.

They had to carry the body bag across the old lady’s lawn to get to the ambulance. We couldn’t see the old lady’s lawn from our window and it worried us. What if she was sleeping there and the police tripped over her and dropped the body bag on her? It could get serious. They might even need a second body bag. But some of the other officers had flashlights and were probably lighting the way. We were hopeful. In a few minutes, with the task complete, the murmuring officers and the spinning blue lights went away and we went back to sleep.

Life – no matter how nice you are to it, it never seems to give you what you want.

Technically, it was off-season, early. But the temperature had climbed into the high 80s and the cold-blooded creatures were happy and emerging from slumber. I was driving in the Anza-Borrego Desert, windows down, with a hot breeze rustling the sleeve of my shirt, on a dirt road with high rock walls on both sides just far enough apart for my pickup to squeeze through. I turned my head as soon as I heard the rattle and caught the last glimpse of a rattler coiled on a rock ledge at eye level, inches away, ready to strike, before my truck was past. I looked in the rear-view mirror and saw nothing but dust. It was a close call, or seemed to be, a crazy split second, and I spent the rest of the day imagining scenarios where my day ended differently, if only I’d been going a little slower.

It was the summer of 2015 and nobody was getting the right amount of water. It was either flooding or droughting, depending on where you lived. Flash floods and gone bridges, or crispy lawns that hurt your feet.

We were in the Okanagan, driving along Nine Mile Road, which scrapes along the Canadian border for a few miles. The dashboard said it was going to be a hundred and five once we stepped out of the air conditioning. We stood there on the border beneath the shade from some big tree, the soft ambience of insects holding us. Before us were meadows and groves of small forest and the dry slopes of mountains. It was so quiet all I could hear was my tinnitus. Sharon was radiant in her Elise costume, surrounded by golden grass that hid the bottom of her skirt. I climbed over the barbed wire fence and announced that I was in Canada. Sharon looked around nervously, as if I might be caught defecting, staying at least twenty feet from the fence, as if approaching it may bring the border patrol down upon us.

A couple of miles away I could see a car making its way along a small road on the side of a mountain and I thought, I’m watching someone in another country.

The only reason I still live in America is because it has the best toilets. 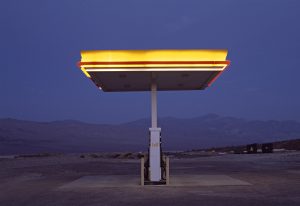