It was only a temporary job. There weren’t going to be any benefits. We all sat around a giant bench rubbing lubricant on plastic shims and assembling them into laser pens. This was in the days when scanners were a brand new thing. The laser pens were used in grocery stores to scan barcodes, which were also a brand new thing. Fluorescent lights hung from long wires just above our heads, humming as we worked.

When we had filled a box with assembled pens, some people at a different bench took the box away and plugged them in to test them. They were looking for the light in the tip to turn red. If it didn’t, it was always the assembler’s fault.

The job was easy and there wasn’t anything else to do so we talked all day long. One guy with a black mustache wore the same black vest and black cap every day and said he was a writer. He never stopped talking the whole day and never said anything very interesting. I remember thinking that he was going to be doing jobs like this for a long time.

Another guy was from Cambodia and had seen his entire family killed by the Khmer Rouge before escaping through the jungle to Laos in his bare feet. He had walked for three weeks. He knew enough English to laugh at some of our jokes.

Another guy had been a lieutenant in the North Vietnamese Army during the war. He had tried to escape twice, got caught both times, and spent time in prison. For his third attempt, he built a small raft and floated it to an island. That time he made it. We tried to become friends but the language barrier made it not work. Everything we said was a struggle but we liked each other anyway.

I visited him once on a Saturday in the Chinatown section of Seattle. I followed him through a produce store, down a long dark hallway and into a tiny, poorly lit room at the back of the store where his grandmother was sewing things for money. We sat in different chairs watching his grandmother work. Every once in a while we smiled at each other a little uncomfortably. Our faces said we had made a mistake.

The job ended shortly after that and I never saw him again, but every once in a while I think about him and try to remember his name and wonder how his grandmother had made it to America. 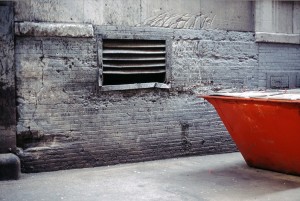