I tilted the lawn mower up to get at the grass around the edge of the bricks. The blade hit and Smitty screamed “Oww!” as a piece of brick ricocheted off his fleshy upper arm, and Dad yelled at me, “Watch it with that thing!” as if I’d done it on purpose.

That was when Smitty had been delivering newspapers, after I’d quit the route and got a job washing dishes. He lived in a house that was high up on blocks near a scrap yard and some other industrial stuff about half a mile from my house. It was a big house, lots of kids, with a long covered front porch. Prairie style, with no other houses around. The steps were made from stacked railroad ties. The house creaked constantly from not having enough stacks of blocks under it. Smitty was the oldest of his brothers, a year ahead of me in school, but two years older. He was a big guy, but not strong, with thick eyeglasses and a slow slurry way of talking.

By autumn, he’d quit the paper route and got a job in the same restaurant I was working in, washing the same dishes, for $2.35 an hour. Anybody could do it.

The back entrance of the CVS pharmacy next door shared a long wall with the restaurant’s kitchen entrance. On his break, Smitty liked to go over there and load up on candy bars. It was only a twenty-foot walk and Smitty liked it because the people didn’t look at him funny in his food-stained whites the way they did when he used the front entrance.

Early on a slow warm evening, before the dinner crowd had shown up, we were all standing outside the kitchen door in our whites and our hairnets, smoking, enjoying the last of the sun, when there was a crash and we all looked up to catch Smitty, in mid-air, leaping through the glass door of CVS’s back entrance. He landed on his feet, stunned.

“Oh, shit!” he said, confused, looking around at the splintered glass on the sidewalk, checking himself for damage. “I thought it was open.”

He seemed alright, so we let loose with the laughter.

“You cut your back,” said someone.

“How the hell did you cut your back?” said someone else.

The manager of CVS came out. He was bald on top and had on a blue shirt. He didn’t say a lot. He looked around at the glass. He looked at Smitty. There wasn’t much to explain.

“I thought it was open. Sometimes it’s open on nice days.”

“Somebody lost the doorstop,” said the manager, and went back inside to get a broom.

Peter, the night chef, stormed out of the kitchen waving his three-foot stirring paddle around, ready to swing it at somebody.

“Smitty jumped out a window,” someone said.

“I cut my back,” said Smitty. He turned around.

“Ya, no shit.” I could tell he wanted to yell at Smitty, but Smitty was still new and Peter didn’t yet have that sense of amused inevitability for him that he had for the rest of us. Yelling at him this early on might make him quit and we were always in need of dishwashers.

For some reason, maybe because I lived near him and knew him from before, Peter made me drive along when he took Smitty to the hospital. Maybe it was because he’d already driven me to the hospital once before, a few months back, when I’d cut my hand after dropping a stack of about fifty dishes on a busy Saturday night. The head manager had been in from the Hawaii office, and in the dining room that evening, and he came barreling into the kitchen after the crash. Peter and the manager and the head chef and everyone else just stood there staring at me, fourteen years old, working illegally, surrounded by shattered plates worth more than I could make in a year.

When I lifted my hand to look at it, blood poured down my arm. They ran water on it but it wouldn’t stop, so they wrapped my hand in towels without getting a good look at the wound. Peter knew my father. He’d helped get me the job, even though I was under age, so I think he felt responsible for me. He was nervous all the way to the hospital.

“One stitch?” he’d yelled afterward. “One fucking stitch for all that blood? That’s it. I’m not driving you to the hospital anymore.”

Yet, here we were. I gave Peter directions to the hospital while he yelled at Smitty to not lean on the seat. “You get blood on my upholstery and I’ll kick your ass.”

The emergency room wasn’t busy, but we had to wait anyway. We were the only guys in there wearing white restaurant uniforms. Smitty’s had some red on it. Mine had food splatters. Peter went to talk to the nurse at the registration desk while Smitty and I took some plastic seats.

I made him laugh when I told him what he looked like coming through the door, how he was just flying through the air in a sort of running position. “You almost seemed suspended. I can’t get it out of my mind.”

“I was running down the hall toward the door,” he said. He spoke very slowly, as if he was just remembering it from a long time ago. “I thought that the bottom frame of the door was the doorstop. And I wanted to jump over it.”

“Hey.” Peter was calling to us. We just sat there, so he came over. “They’ll see you in about ten minutes,” he said to Smitty. Then he wrote a number on a piece of paper and handed it to me. “You stay with him. When he’s done call me at that number and I’ll come get you.”

“Where are you going?” I said.

He said he was going back to the restaurant but I was pretty sure that the number he gave me was for the same bar where my dad called in pizza-to-go orders sometimes. After a little while, the nurse came over and told Smitty to follow her. I got up, too, but she told me to stay where I was. She led Smitty into another room and pulled a curtain around them. I heard her tell him to take off his shirt. 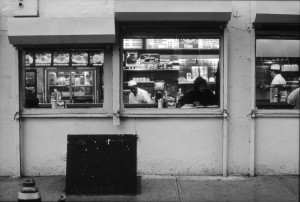