Chuck and I drank some beer in the Million Dollar Cowboy Bar and then stole some antlers. The antlers had been made into arches wrapped in chicken wire at the four corners of the park in the center of Jackson Hole. We stole them by tugging on them until we found loose ones and then weaving them out of the arch.

We had a four day backpacking permit for the Grand Teton for the next day. That gave us a day to kill. Before stealing the antlers, we had killed the earlier part of it sitting in the park with a beer. It was sunny and the grass felt good against our legs. There were a lot of people around. We were lucky enough to have landed in town on the weekend of a large Mormon summer festival of some sort. There were thousands of them in town. Large families. Cute Mormon girls our age. Mormon moms with kerchiefs and cat-eye sunglasses.

After a while a cop came over to talk with us. He was friendly. Young, blonde. He probably had a good standing in the community. He asked where we were from, how long we’d been on the road, what we were doing in town, usual stuff. Then he pointed at our beers.

“Those are illegal,” he said.

He shook his head. “You can’t have an open container in the park.”

There wasn’t much we could say to that. How could we not know? We offered to throw them away. We were apologetic. Charming. The cop looked around and then back at us. “I have to take you in.” He made it sound like it bothered him to do it to us and asked to see some ID. He was still smiling when he asked, his blonde hair iridescent in the sun.

“They’re in the car.” We were being cooperative, hoping that we could still change his mind. He seemed too nice to arrest us. The cop followed us over to the car and when I opened the door I saw the bong on the passenger side floor. I dove for it and shoved it under the seat, spilling rancid bong water everywhere. My mother’s car. She wanted it back when the trip was over. I grabbed our licenses from the metal box under the seat and handed them to the cop. He looked them over like he didn’t believe them.

Everywhere else it was 1978, but in Jackson Hole it was still 1968. We were longhairs from the East. Suspicious. Drinking a beer in a park couldn’t possibly be our only crime. There had to be more. There was. Two months earlier, while camping on a lake shore in Eastern Wyoming (same damned state) Chuck had been mildly arrested by a sheriff in a boat for fishing without a license or a life preserver, in an unapproved craft ($20 inflatable raft, Kmart). I waved when the cop was towing him in, thinking he was doing Chuck a favor.

The cop radioed in our identities and they made some phone calls at the station. Now we were big time. He detained us on the sidewalk, holding onto our driver’s licenses. We were ignorant and now we were going to pay for it. People began to gather at a safe distance. A few minutes went by and then we heard a siren. Mormon heads turned in its direction.

I looked at the cop. “You’re kidding.” He stayed silent in his blonde, friendly way.

Two police cars came barreling around the corner, scattering Mormons, and screeched to a halt in a V formation, blocking the street.

The Mormons swarmed, forming a wide dense circle around the scene. Most of them had cameras. The cops told us to put our hands on the trunk, one of us for each police car–”Keep them apart!”–and told us to spread ’em. We were shoeless and shirtless, wearing only cutoff jeans shorts that would have fit a GI Joe doll comfortably. A cop patted me down. It only took one pat, but he did it some more for the audience.

“What are you looking for?” I said loudly.

“Quiet down, son” he answered, leaning in close on my ear like there could be more to come if I wasn’t careful. Son.

They put real handcuffs on Chuck and on me they used a plastic strap tie. The cameras were going wild, mostly Kodak Instamatics. Vacation treasures. “And these are the murderers we saw getting arrested in Jackson Hole.”

When they put me in the back of the police car the driver said to one of the other cops, “Don’t put him behind me. I don’t want him kicking me in the head.” I kept laughing and making unwise remarks on the way to the police station. The driver leered at me in the rear view mirror. We weren’t going to get along. We had different goals. At the station, they made Chuck and me sit in chairs at different desks. I didn’t see a jail but figured there was one around somewhere. After yelling at us for a while, a cop pulled out some keys and took Chuck’s handcuffs off. But they couldn’t find the snips for my strap tie and my hands had started turning blue. The cops looked embarrassed and we gave them a little hell for it, acting superior and oppressed as they searched through desk drawers. They ended up sawing through it with a scissor blade, rubbing it back and forth, back and forth, until it snapped and fresh blood rushed through my hands.

The final tally: $25 fine, each. After we paid they let us go. They didn’t offer us a ride so we walked back to town barefoot.

We put the stolen antlers into the back of the station wagon and drove out to our campsite in the dark. The next day, we went backpacking for four days and had a good time. We took a lot of pictures of waterfalls. Climbed rocks. We sat on a cliff at sunrise, looking east across the flatness of Wyoming.

On the way down, about a mile from the bottom, we ran into two women around our age, going up, backpacks towering above their heads. We stopped and talked, told each other where we’d been, where we wanted to go. They both had long hair and shorts on. Hiking boots with cotton tube socks.

“You guys are going down, huh?”

We didn’t have any food left and we were beaten. We couldn’t go back up. We wanted to. We watched them go. “Nice to meet you.” They looked back and smiled.

When we got back into Jackson Hole we went looking for the blonde, friendly cop and took a picture of him walking through the park, being friendly. Then we drove on to Yellowstone. 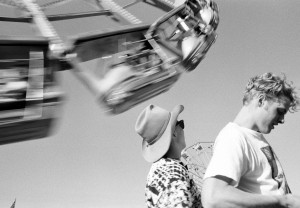