Ignorance Is Only Bliss If You Don’t Care

I sometimes think that I don’t know enough about anything. When I say sometimes what I really mean is usually, or often. Or constantly. For instance, I like beer, but I hardly know anything about how it’s made. I know that there are hops in it and that I like hops in my beer, the more the better. But I don’t know why I like them or why they make beer taste better or even how they are used to make beer. Some people can taste beer and tell you which kinds of hops were used to make it. They can describe the beer much as people describe wine, using words like ‘mouth feel’ and ‘notes of caramel’. But not me. I have no idea how to describe the things I taste, I just know whether I like them or not. I guess that is a form of knowing something, but it isn’t much.

I meet a lot of people who know things deeply and are great resources of information. I can ask them questions and they can answer with confidence, even inviting me to ask more questions. Later, I will feel guilty, or like a failure, for not already knowing what they have told me. Then I will tell myself that I will go and read a book about what they have told me so that I, too, can be more knowledgeable and answer questions about the topic with confidence. My wife and I recently met a man who knows a lot about birds. He works in the ornithology department of a museum, so I guess it’s his job to know about birds, but after listening to him speak about them I couldn’t help feeling that I should have known some of the things he was telling us. Why don’t I know more about birds? They’re all around. I see them everyday. Why don’t I know more about them?

It seems that I spend an awful lot of time putting information into my brain that I then can’t get back out. I read constantly, trying to know more about everything, but it doesn’t seem to help. I am a slow reader and I drift a lot and am easily prone to distraction. But still, I read so much. I can’t even begin to imagine just how many words I have seen and recognized over my lifetime. I have stacks of books that I consider complete and sometimes I am proud of having read so much. But then I will try to recall something that I read in one of the books and my pride goes away. Most of the things I can remember from them are trivial or not very helpful and I am wary of bringing up the subject in conversation for fear of being embarrassed if questioned for more information. For instance, at the same museum where my wife and I met the man who knows a lot about birds I spent a lot of time looking at displays on the history of Alaska. There were so many displays, each with its own detailed description of what I was seeing. I read and read the descriptions, filling myself up with as much information as I could on the history of Alaska. And yet, when I try to recall what I read, all I can remember is that Quonset huts were named for the Rhode Island town in which they were first made. That’s not even about Alaska.

I wonder about my brain and the way that it works. Or the ways in which it doesn’t. Why do the things that come out of me seem to be so much less than what went in? I know that the information is in there. Why can’t I get to it? Or maybe it’s not in there. Maybe the information never made it in. Maybe it ricocheted off my eyeballs the moment I saw the words and never got anywhere near my brain. Is that possible? I guess I should find out. There has to be something written about that somewhere.

It occurs to me now that I may be speaking more about memory than ignorance. After all, I do put a lot of information into my brain, regardless of whether some of it ricochets off my eyeballs. That should count for something, even if I can’t get to it anymore. I don’t think it’s really my fault that I can’t remember. That should make me feel better, shouldn’t it? Then again, there was that thing with the birds. I don’t know much about birds, so there isn’t anything to remember anyway, except that they have hollow bones and that helps them fly, something I already knew before going to the museum. I don’t know, maybe I am talking about ignorance. I just don’t know. 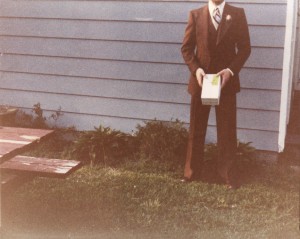