David Crane and the Dave Next Door

There is a man named David Crane who lives outside my window. The window is in my studio on the top floor of our old house. It is the highest window on the street and looks out over the freeway. David Crane lives on the hill between my house and the freeway, flattening the grass in a large circle and laying down cardboard each night before sleeping.

Every morning, David Crane carries his blankets and tarps down the grass hill, walks along the chain link fence that ends at the top of the off ramp, crosses the street, passes by my house and puts his things on Dave’s porch for the day. Dave lives next door to me. His house is small and not well cared for. Taped to his living room window are faded pictures of FDR and Obama. There are other faded pictures, too – mostly to do with American freedom – that had at one time meant something to Dave. Dave is an alcoholic who lives on disability. He rarely showers or changes his clothes. His house inside is a dump, with cat food bags and cat droppings everywhere amongst his things. He never turns on his heat in the winter. Whenever I see Dave, there is snot in his beard and usually a little crusted blood on some part of his face or head. He greets me warmly with a dirty hand and long yellow fingernails and sometimes we talk, but never for very long. Dave did one smart thing before he let the alcohol take him over­­ – he bought his house and paid it off. He is very proud of his home, despite it being the wreck that he has allowed it to become, and so always insists that David Crane fold his blankets and tarps neatly when he puts them on the porch for the day. When it is warm out, there is a hanger on the porch for David Crane to hang his coat on.

Occasionally, when it’s raining or cold, David Crane stands on Dave’s porch, stretching the time, stalling as long as he can before beginning his day. Each evening he returns to the porch for his blankets and tarps, carrying them back to the grass hill under one arm, while his other hand holds up his pants.

You would never see David Crane rummaging through the trash for food, or standing on the corner with a piece of cardboard in his hand asking for money the way that some other homeless people in our neighborhood do. I have never seen him take a leak in public. He has manners and respects the neighborhood, spending his days wandering our streets and alleys with an air of intention about him, as if he had important business, keeping always within a four to five block radius of our house, of Dave’s porch next door. When he isn’t walking, he sits on a bench in the park behind our house, twitching nervously, or searches for small bits of food to feed to the neighborhood cats.

David Crane doesn’t hurt anybody. Sometimes he has episodes where he yells and thrashes, and it scares people because he is so thin and so tall and hasn’t cut any of his hair in years. His big nose sticks out of his briar of black and silver hair and sometimes you can see his eyes, wide with fury. When our daughters were still living at home, we used to call him Mr. Tourette. We didn’t know his name then and we worried for our safety. But David Crane only yells and thrashes by himself. He does it in the park, cursing at the ground and at the inside of his head, looking at no one else.

Dave said that David Crane had been the valedictorian of his high school class and had gone to a university. After his first semester, Dave says, David Crane came home to visit and he was a different person. He had somehow, in those few short months, become schizophrenic. He took to the streets of our neighborhood long before we lived there and may still be there after we have gone.

David Crane has a family member nearby who provides him with minimal care. His clothes are dirty and the elbows of his coat are worn clean through, but he always manages to have some food. Every few years he seems to have a new pair of shoes. But his family leaves him on the street because that is where he chooses to be, according to Dave. He refuses his medication and does not like to be told what to do. I have said hello to him many times, but he never answers. He knows who I am. He knows who my wife is. We can tell this by his reaction when he sees us walking toward him down the alley. We have all walked this alley for fourteen years. It would be impossible not to recognize each other. But whenever he sees us coming, he turns away and pretends to be occupied with something on the ground, or on a fence, or on the side of an old garage, feigning concentration until we pass. He doesn’t talk to anyone except Dave next door.

I believe that I am the only one who can see David Crane where he sleeps. He is directly across from my high window, with the bi-directional river of automobiles rushing behind him. When it is raining, the cars raise a mist from the road and David Crane becomes ghostly, standing there in the pouring rain looking down at his bedding. Sometimes, I sit at the window and watch him, leaning my elbows on an old wood shelf that some previous tenant nailed there. I have watched David Crane in the sunlight and in the darkness, in the rain and in the snow, as he arranges his blankets, or lies on the ground with his hands in the air, talking to his fingers. I think he knows that I watch him, but not always when.

Some years ago, I began photographing David Crane and his furniture of cardboard and blankets and tarps. I have only done this from the window. I have a folder on my computer desktop called David Crane filled with pictures of him on the grass hill in every kind of weather and at all times of day. I don’t know that I will ever do anything with the pictures. I am, after all, photographing him in his home without his permission. He has never bothered me. I don’t see why I should bother him. 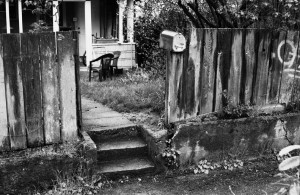