In early June, the sun is high all day and does not come into this room with more than a sliver of light cast on the floor just below the window at midday, leaving me mostly in shadow and heat.

I wanted to have fun, do some things, get some sun. But my head was filled with all the wrong people again and I stayed in my chair for much of the day, watching the sliver of light move slowly toward my bare feet.

The other night, I was watching The Friends of Eddie Coyle with my wife. I needed to relax and put some thoughts aside, and 1973 seemed a good place for it. Robert Mitchum as a working class gunrunner with a heavy Boston accent. It was nice to see shots of home from long ago. The bank they robbed in the opening sequence was one where I used to have a savings account. In one scene they showed a bowling alley near Neponset Circle where I used to bowl. This was in the early days, when I never drank American beer, only Canadian. Mitchum pulled his car into the parking lot of the bowling alley, huge neon signs overhead – Ten Pin! Candlepin! I had to explain to my wife what candlepin bowling was, that it was played with bowling balls the size of shot puts.

They used to film a TV show there called Candlepins for Cash and one time I got a spot in the audience. I must have been with someone but I don’t remember who. The show was hosted by a local sportscaster named Bob Gamere. Everyone knew him. He was a popular guy with mischievous eyes and the show was a hit. He would talk to the contestants for a few minutes before they bowled to loosen them up, laugh with them a little, get some personal information to help soften up the audience and give it someone to root for.

I was sitting in my audience chair, watching the crew get the cameras and lights ready, eyeing the countdown to show time, when suddenly there he was, standing off to the side holding a microphone. Bob Gamere. From TV. He had that look, that smile, a kind of polish, with everything in place and nothing to fear, and I knew my life would never be the same again. He was waiting, his machinery idling, and when the announcer introduced him he walked out in front of us, beaming and waving, and nobody clapped. The smile fell apart. He got a look on his face like he’d just caught the dog pissing on the carpet. His microphone drooped, and as he walked back to the side to do it again, sagging a little, his mouth tighter than before, the director took a moment to educate us on the proper interpretation of the applause sign. “When I hold this up, everybody clap.” It made so much sense. I looked over at Bob Gamere. He was staring vacantly at something inside himself. I couldn’t figure out how he would ever get it back; that sparkle; that untouchable smile. But he was ready to try it again. We all were. We were all part of the show now. Let’s go. The announcer came in the same as ever. The sign went up. The applause and the resurrection. Oh, how we loved him. He held his microphone like the staff of Moses before him and spoke to us as if we’d been friends all our lives. We laughed at everything he said, agreeing with every bit of it, ready for any sacrifice.

Years later, after the show had ended and after drinking had ruined a few jobs for him, Bob Gamere was arrested in his home for emailing child pornography to some friends. He was sentenced to five years. He’s out of prison now, an old man with a different smile, banned for life from being around children and the internet.

There are rooms and corridors and warehouses inside of me that I haven’t visited in years. I have no idea what they’re like until something emerges from one of them and finds me. And they are very good at finding me. But by late afternoon in early June, when the sun has moved beyond the roofline and the window itself is in shadow, the light in this room is flat and pleasant and tinged with blue. The rooms and corridors and warehouses grow quiet and I leave the room for a while to sit outside with a new American beer and watch the trees before dinner. 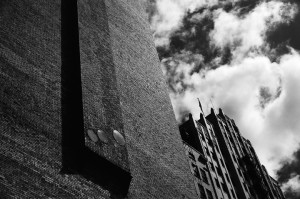