Someone told us the boss was dead. He fell off a ladder, got hit by a car, drank from the wrong bottle. Something. Anyway, he was dead now and that meant things were going to be different. I was planning on joining the Navy in a few months so it didn’t matter much to me anyway. Within a few days we had a new boss.

I was moving some of the power supplies that I’d just finished repairing onto a shelf when Laynie came up and said she wanted to talk to me on break. I had been to her house a few nights before for dinner. She had a long narrow house with a low ceiling, barely high enough to stand up in.

After dinner, and after we put her son to bed, we sat on the couch close to each other, looking at a picture book of Alaska, the place she really wanted to live. New England was a long way from Alaska for someone who lived in a converted chicken coop. When we finished with the book, we kissed for a while without making eye contact, then we went to bed and helped each other out before going to sleep.

Now she wanted to talk about it.

She was smoking as we stood on the loading dock watching the rain.

“What do you think of the new boss?” she said, although she didn’t care what I thought of him. She was just saying something until she got to the point. She wanted to talk about the guy she really loved, the one she missed.

I shrugged. “It doesn’t matter.” There were some trees across the lot with rain bouncing off their leaves. Then she said:

“I can’t sleep with anyone else without thinking of him.”

I looked at her briefly then looked away again. She was twenty-nine, ten years older than me, with very long brown hair, and said once that she had almost gone to Woodstock but at the last minute it hadn’t work out.

“Does that mean you thought of him the other night?” I said.

She smoked a little more with one arm across her chest.

“Don’t ask questions that you don’t want the answers to,” she said. Then she tossed her cigarette into a puddle. It made a small desperate hiss.

I leaned against a pole, not saying anything, just looking out into the rain, which showed no signs of letting up. After a minute she went back inside. 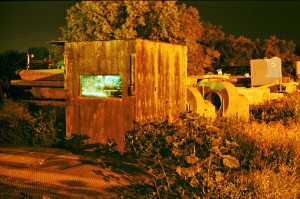