The Richard Brautigan book in my hand was old. It had been printed in 1971 but I was reading it in 2015. The words hadn’t changed. The cover was flaking and pieces of it were missing. Some parts of it had been chewed off by a dog of mine that had died years ago. There were no ninety degree corners left intact but you could still see the picture of Brautigan on the cover, his deep eyes glowing mischievously above his mustache as he leaned on a pole in front of a library next to the beautiful dark-haired woman with boots on whom I have always thought of as Vida. The book crackled when I opened it and a few flakes of the cover fell onto my pants and onto the floor of the bus. The pages were wavy with age. Some of them were mapped with dark stains from something that had been spilled on them at some point in their history. The fragrance of the pages was that of a pleasant long-missed grave. It was the perfect length book for me to read on a bus trip from Seattle to Portland, Oregon.

Somewhere near Centralia, the bus pulled over onto the side of the Interstate, the rumble strips in the breakdown lane vibrating through our bottoms as we came to a stop. Everyone looked around nervously. There had been those terrible terrorist attacks in Paris only two days before.

“Sorry folks,” called the bus driver, as she freed herself from her seat and started walking down the aisle. “I’ve had a report that someone has been in the rest room for forty-five minutes.”

I was seated near the back, across the aisle from my wife, so I got to watch the driver’s approach for almost the full length of the bus. She was a little heavy but the bus was familiar to her and she moved along easily. When she passed me I closed The Abortion and waited for the next thing to happen.

The driver knocked on the rest room door.

“Excuse me,” she said to the door. We all waited, a little tense. Forty-five minutes was a long time. We had to be ready for anything.

“Yes?” came a woman’s voice from inside. The rest room was very tiny and her voice was muffled and apprehensive. Everyone was relieved to hear it.

“I’ve had a report that someone has been in here for forty-five minutes,” the driver said. She was looking at the floor as she said this, perhaps to give the woman a little privacy.

Some of the passengers laughed. It was a laughter of shared experience, but one that most people hoped they would never have to share. I wondered if the constipated woman had heard the laughter. The bus driver shrugged, smiling a little, and then went back to the front to continue driving the bus.

A few seconds after we were safely back in traffic, the constipated woman came out of the rest room. Some of the passengers turned to see what she looked like. To see what a constipated woman looked like. I saw her from the back as she hurried past me in the aisle. She was very thin and had hard, wide, bird-like shoulders that were very straight across, like an aqueduct beneath her sweater. When she turned to get in her seat a few rows up, I saw the side of her face, blotched with embarrassment.

My wife gave me one of those looks from across the aisle that said she didn’t believe the woman’s story about being constipated. There was something she wasn’t telling us.

Another flake fell from the cover of The Abortion as I opened it to see what else Brautigan had to say about the unusual beauty of Vida. Outside, it was raining. 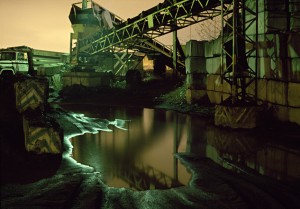