The sun was getting low the third time I passed through Moses Coulee that day; not quite magic hour yet, but the light was warming and the cliffs were growing shadows. I blew off the last frames of black and white out the window while driving so I could switch to color film for the night shoot. The sky was clear, just blue, and I was beat from driving all day. I needed rest.

Fishing boats pocked the surface of Banks Lake as I drove past the picnic area. I pulled around behind Andy’s Gas and Cafe and parked in the gravel lot of the A La Cozy motel. I locked the car out of habit and went to the office, trying to walk like I hadn’t been sitting behind the wheel for eleven hours. To the left of the office door there was a lawn chair with a little table next to it and an ashtray with a burning cigarette in it. The manager was inside, standing behind the counter, waiting for me. She was very thin and wrinkled from a life of cigarettes and sun. She didn’t wear glasses, but the way she squinted made it look like she needed to.

I asked for a room off by itself because I went out late at night to do photography and didn’t want to disturb anyone. I had told her the same thing when I’d stayed here other times but she didn’t seem to remember me, giving me a wary look, trying to figure out if I was being honest. A lot of different people came in from the road. She said she only had one room left and it wasn’t by itself and did I want it anyway. I looked out the window. Mine was the only car in the parking lot.

“They’re all out fishing,” she said. “Aren’t you fishing?”

She nodded, but didn’t ask about it. “Well, they’re all fishing. They should be back soon. We’re having a barbecue. You’re invited, if you want.” I thanked her and said I’d think about it as she handed me the key.

I realized that I had been in this same room before, about a year ago. I recognized the bedspread and the art, and the lamp with the chip out of it and the wobbly lampshade. There were two beds, a queen, and a twin tucked into an alcove next to the bathroom. I threw my bags on the twin.

I took a shower, then sat on the bed in my underwear looking at a book on gulags I’d brought with me, flipping through page after page of sad, empty faces. My plan was to grab something to eat then sleep for a few hours, waking around midnight to go out hunting for compositions. I’d been in these little towns so many times over the years. Coulee City, Hartline, Almira. They didn’t change much. But I always managed to see them in a different way each time, to find something to photograph that had eluded me the last time. I think it had a lot to do with how comfortable I was crawling around a sleeping town in the middle of the night, setting up my tripod, the clicks of metal amplified in the darkness. Sometimes a police car would show up, the cop shining his spotlight on me and asking me what I was doing.

“Taking pictures,” I would say, and the cop would look around.

“Of what?” There was usually another cop in the car, laughing at that.

It was always the same. I would show them my driver’s license and a business card and talk about what I was doing until they believed it, or at least believed I wasn’t committing crimes. Then they would tell me to be careful and leave me alone.

I could hear the fishermen gathering outside for their barbecue. They were talking a lot and slamming doors and it was making me antsy. I decided to go for a drive. The parking lot was now filled with pickup trucks connected to boat trailers with boats on them. I slipped between a pickup truck and my car and got in. I drove around some more, along straight empty roads bathed in orange light. When I returned just after sunset, the barbecue was over and all the fishermen were in their rooms.

I stood outside for a minute to watch the sky darken. The motel manager was out there cleaning up the last of the barbecue mess. She stopped cleaning when she saw me and used me as an excuse to take a smoke break. We talked in the gravel parking lot, watching as the neon A La Cozy sign appeared to grow brighter as the sky grew darker. The word Vacancy was lit, but the No above it was dark.

“I thought you were full,” I said.

She blew out some smoke. “I am. The No burned out yesterday. I’m trying to get the guy to come out and fix it, but he can’t make it until the day after tomorrow. I’ve been turning people away all evening.”

I just nodded and waited for her to talk again.

“Why couldn’t the Vacancy burn out instead?” she said. “Most people know what no means.”

She crushed the end of her cigarette into the gravel with her shoe, then picked it up and took it to the ashtray by her door. I walked over to Andy’s Gas and Cafe and got something fried with ketchup for dinner. I carried it back my room and ate it on the bed while cruising TV channels. Then I arranged my camera gear by the door, along with the small cooler, and crawled into bed. I set the alarm for midnight, turned off the light and pulled the sheet up around my shoulder. 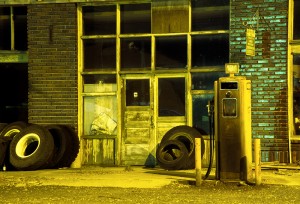 2 Responses to A La Cozy